Home » Travel » Walt Disney World » How to do the 4 Parks, 1 Day Challenge

Welcome to this month’s Blogorail Blue Loop. Today we are strategies to tackle all four Walt Disney World parks in one day!

With 4 theme parks to choose from at Walt Disney World, we often dedicate at least one full day to each.  If time allows, we might be able to use a 5th day of our trip to go back and hit 1, 2, 3, or maybe even all 4 parks to do some of our favorites again. If you choose to do all 4 theme parks in one day, they call that the “4 Parks, 1 Day Challenge”. 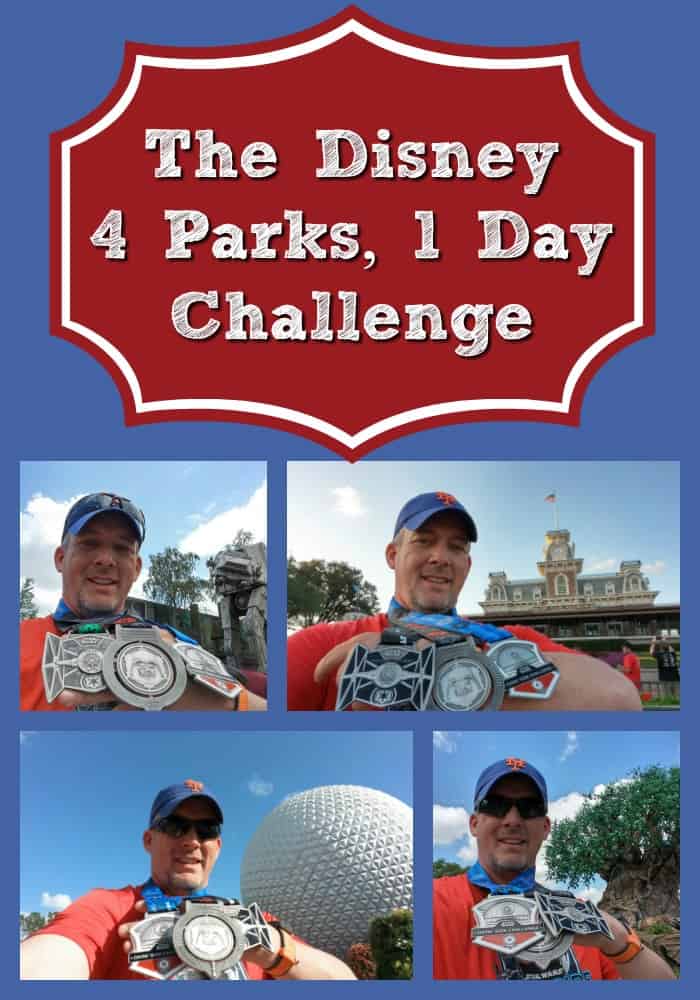 Lisa and I did the 4 Parks, 1 Day Challenge years ago without really knowing it was an actual thing.  Since having kids, it hasn’t been something we thought about doing again, until I visited by myself in April.  Now, Lisa and Bella have a girls’ trip coming up and are planning to take on the challenge too! Here’s our approach to how to accomplish this feat.

How does it work?  Well, there is no official rules to this except for you have to set foot in each of the four Walt Disney World theme parks on the same calendar day, within the park hours for that day.  (Closing out one park after midnight and doing the other 3 after they open the next morning doesn’t count).

Now, many would say just entering the park isn’t enough to count.  So generally, it is accepted that you must do something within the park while you are there for it to count.  But you can certainly customize your challenge to suit your party.  One idea is that you need to visit at least one attraction, eat/drink one thing, and meet one character in each park.  Others might take it further by doing at least 2 of each, or by trying to do every thrill ride, or just meeting every character, or trying to see different shows.  It’s up to you, and that gives you the ability to make it as fun as you want.

How to Plan Your Challenge

You’ll need to have access to all four parks on the same day.  For that you’ll need either a Park-Hopper ticket or an Annual Pass.  The park-hopper ticket add-on for the whole family is expensive. At $69 per ticket to add the ability of going to more than one park in a single day, you’re looking at $276 for a family of four!

With kids, we haven’t bought the hopper option since it is money we can use on other things, but buying annual passes that we can use over multiple visits saves us money and gives us the ability to hop!

The hours of each park can play a big role in how you go about planning your day and how much time overall you have to accomplish the 4 Parks, 1 Day Challenge.  If you are staying at a Walt Disney World Resort, you can take advantage of early morning or evening Extra Magic Hours to give yourself extra time.

If your challenge to-do list includes any shows that happen only at particular times, or attractions and restaurants that aren’t open all day, you’ll need to take that into account, as well.  In April, my time was short.  I had run the Star Wars Half Marthon that morning.  So, I only had about 6 total hours to hit all four parks.

Getting from one park to another is another important part of the challenge.  Thankfully, Disney has buses, water transportation, and the monorail to help you out.  Having an idea of how long it takes to use each will help in your planning.  If you have your own car, remember to take into account the time it takes to get to and from the car.  There is no rule against using a taxi or uber to get around either.

Having a plan is essential, so knowing which park you are going to hit first, second, third and last should be thought through ahead of time.  Where you start may be determined by what you want to eat for breakfast, or perhaps to make sure you can hit certain attractions with the short early morning waits.  You may also want to end your day in a certain park to enjoy a particular dinner or nighttime spectacular.

I can’t remember the exact order we did the parks that very first time.  I only remember that we started out at Disney’s Animal Kingdom so we could get soaked riding Kali River Rapids and we’d have the rest of the day to dry off.

For my April trip, I also started with Disney’s Animal Kingdom because it was the closest park to the hotel I was staying at. After the Half Marathon, I returned to the hotel to shower, change, and pack the car.  I started that challenge immediately upon checking out.  From there I moved to the next closest park, Disney’s Hollywood Studios, then over to Epcot and finished up at Magic Kingdom before heading to the airport.

Lisa and Bella are doing the reverse order of my April challenge.  They are starting with Magic Kingdom, then Epcot, Disney’s Hollywood Studios for dinner, and finishing up with Disney’s Animal Kingdom so they can see the new nighttime fun there!

Having reservations will help keep you on schedule.  For FastPass+, it may depend on which attractions you are looking to do in each park.  If you make early morning FastPass+ in one park and use them all, there is a chance you could make more as you go to each park after that.  Another strategy is to use the short wait times at park #1, and use FastPass+ for either park #2 or #3 in the afternoon when lines are longest, and then hope for short lines at night at park #4.

Of course, if incredibly popular attractions like Seven Dwarfs Mine Train or Soarin’ are on your list.  You may want to make sure you get a FastPass+ for one of those, which may determine what time of day you hit that park.

For my April challenge, I made my FastPass+ reservations for the Magic Kingdom because I knew the rides I was going on in the other three parks had the potential to be quick.  I chose the Haunted Mansion because it’s one of my favorite attractions and I hadn’t done all my other favorites earlier in the trip.  For the other parks, I did Expedition Everest using single rider line, Star Tours on a fairly short standby line, and Spaceship Earth was pretty much walk-on, which is why I chose it.  (I spent a good amount of time at Epcot the day before, so I wanted to be in and out quick.)

Lisa and Bella are also using their FastPass+ in their last park to make sure they get to do Kali River Rapids at night, as well as the nighttime version of Kilimanjaro Safaris.

For Dining, I stuck to counter service and snacks since my time was limited.  I was starving by the time I got to Disney’s Animal Kingdom and grabbed lunch at Flame Tree Barbecue.  A Darth Vader Cupcake seemed appropriate at Disney’s Hollywood Studios… A Cronut at Epcot kept me moving… and I had to have a Dole Whip at Magic Kingdom!

Lisa and Bella have one sit-down meal planned for dinner in Disney’s Hollywood Studios.  They have some ideas for the rest of the day, but they aren’t committing themselves to anything just yet.

Pics or it Didn’t Happen!

Once you’ve got your 4 Parks, 1 Day Challenge all planned out, remember to have fun and make sure you document everything with pictures!!  Having all the pictures in each park wearing the same outfit will be your proof that you conquered all four parks in one day!

In all of my pictures, I am also using my runDisney medals!

Be Flexible and Have Fun

You know what they say about “best laid plans” and all… don’t be afraid to call an audible and change things up if something isn’t going your way.  Ride closures and weather can be a downer, but only if you let them!  Understand that things happen and be ready to go with the flow if need be!

We’ll update this post with more details on Lisa and Bella’s challenge at the end of the month!

In the meantime, let us know how you’d go about completing the 4 Parks, 1 Day Challenge!

For more strategies to tackle four parks in one day,
check out the other great posts from the Blogorail!

Here is the map of our Magical Blogorail Blue | 4 Parks 1 Day Loop:

13 shares
We use cookies to ensure that we give you the best experience on our website. If you continue to use this site we will assume that you are happy with it.OkPrivacy policy