We were provided with a Shark Rocket Complete Series Ultra Light Upright Vacuum for the purpose of this review.  My opinion of this product is my own.  This is how it performed in my own house, not in a lab or part of a TV infomercial.

We’re dirty people.  There’s no denying it anymore.  There were several moments while taking the pictures for this post where I got down on the floor for just the right angle and swore when I saw the amount of dirt, dust, debris and who knows what else that’s been hiding around our house.  We’re dubbing 2017 “The year of getting our sh*t together”.  One of the resolutions on our list is to keep a better house.  And thanks to the folks at SharkNinja, it’s going to be a lot easier to achieve that goal armed with a Shark Rocket Complete Ultra-Light vacuum. 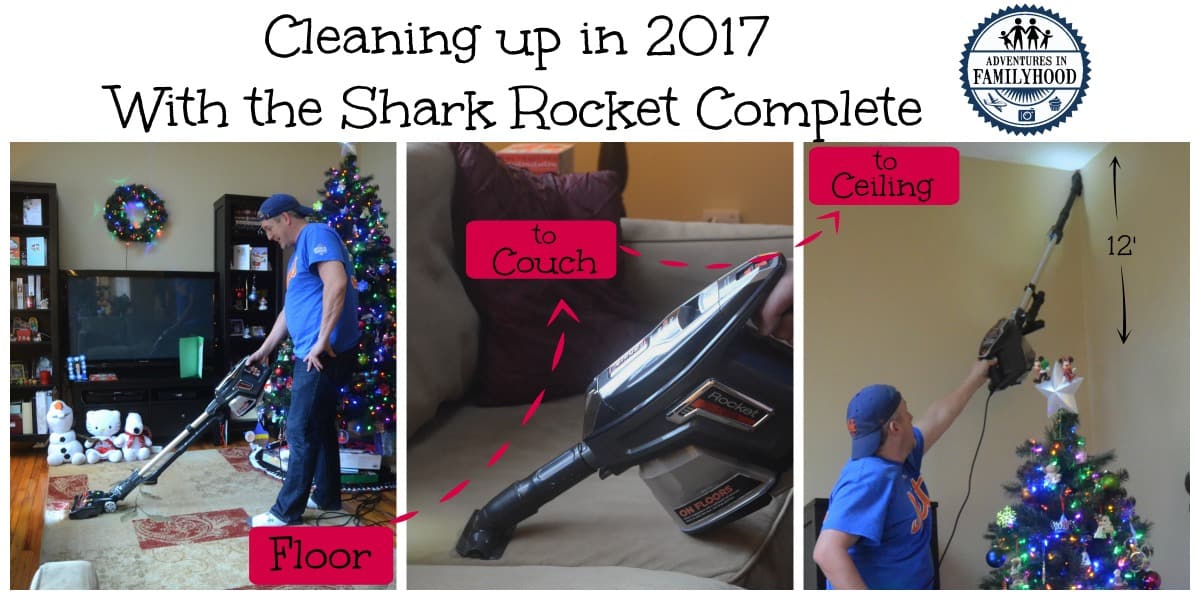 I was a bit skeptical about an ultra-light because of its size.  It’s so much smaller and lighter than the other vacuums I’ve owned. But simply put, the Shark Rocket does things my larger vacuum can’t.  I already owned a Shark upright, but it wasn’t the floor-to-ceiling beast that this one is. 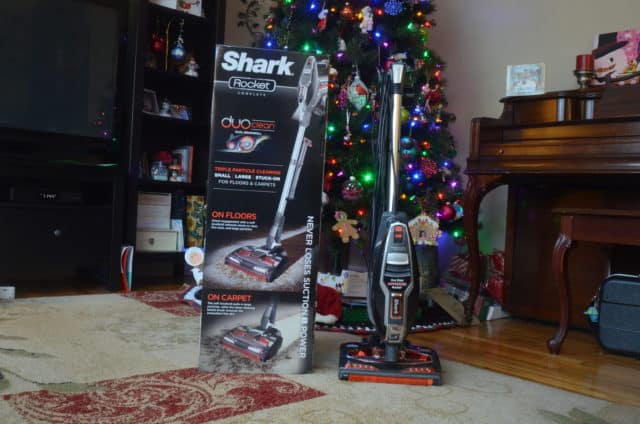 The Shark Rocket Complete Series is the latest generation of Ultra-Light Upright vacuums.  They feature Duo Clean Technology, which means that they have not one, but two different roller brushes to help pick up different types of dirt.  The result is what they call “Triple Particle Cleaning”: the ability to vacuum large particles, small particles and stuck-on particles.

There are a few different models, with the difference being the accessories you get.  We were supplied with the HV382 model with the following accessories 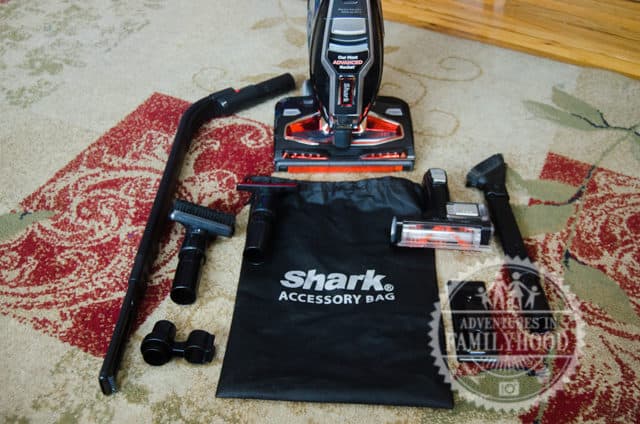 Putting together my Shark Rocket was very straightforward.  The wand tube inserted right into the floor nozzle, the handheld vacuum attached to the wand.  The release levers to detach these parts are all easy to operate.

The one thing I noticed once it was assembled is that it wasn’t going to stand on its own.  That made sense since it is top-heavy. I thought that I was missing something, but on the very next page of the manual, it said in bold:

Warning: This vacuum does not stand up on its own, so when taking a break from cleaning, rest it against a piece of stable furniture or lay it flat on the floor. Using for an application where the unit lacks stability may result in personal injury.

This was annoying, but I quickly got over it once I started to use the Shark Rocket. 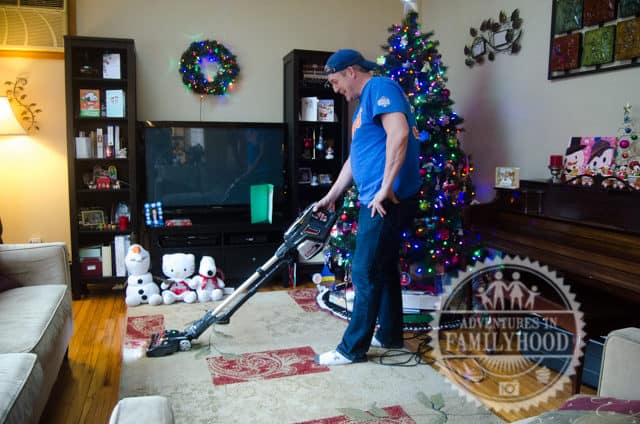 I took my new toy for a spin on the area rug in our living room.  The kids (and I) are always snacking here while watching TV.  The area rug, the couch cushions, and under the furniture are always in need of cleaning, multiple times each day.

The first thing I noticed about the Shark Rocket was how much power it packed for its size.  It feels just as powerful, if not more powerful than my larger upright vacuum. I felt like I was trying to keep an excited dog from running away from me.  In fact, if I put the vacuum down without shutting it off first, it would do just that!

The second thing I noticed was that there was no option for turning the roller brushes off.  The last couple of vacuums I have owned would allow you to turn the rollers off when using them on hard surfaces.  I checked the box and manual, and to my surprise, you leave the brushes on for all surfaces.  There is a low setting which is gentle enough for hard floors and area rugs.  Then there is a higher power setting for thicker carpets.

It did a decent enough job on the area rug.  That wasn’t much of a challenge.  The toughest part was probably a small sticker that was being stubborn.  It took a couple of passes, but the Shark Rocket sucked it up. 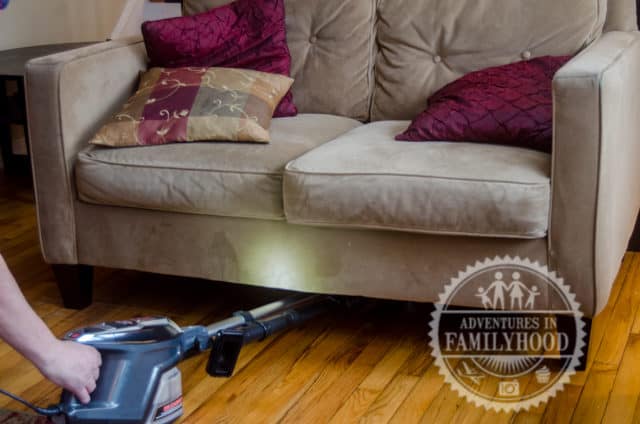 My first wow moment came when I moved on to the floor and discovered I could get ALL the way under my couch with the Rocket!  Normally, I’d have to move the couch or get the broom to sweep it all out into the open.  I went under both couches, the sofa table, and then went under the dining room table without having to move the chairs! 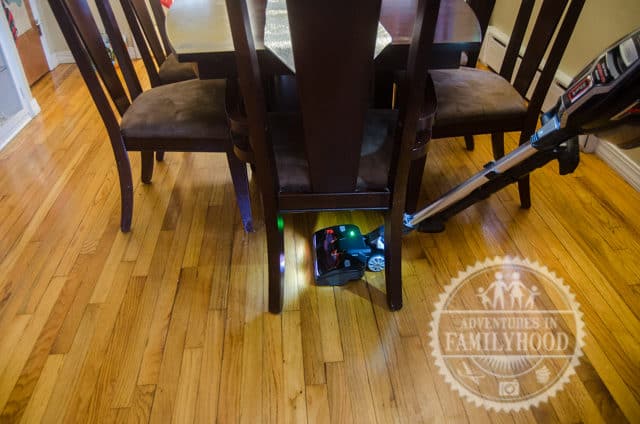 The head swivels very easily and I could go under one chair and make a hard turn to go under the table.  That’s going to be awesome when it comes to cleaning up after meals! 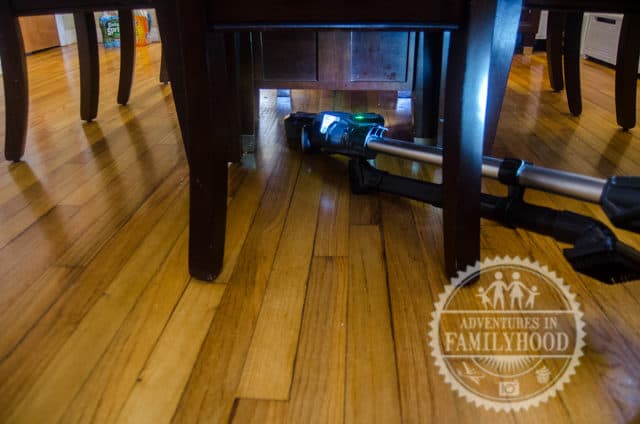 Normally, I’d be moving furniture or using a broom to get at whatever dirt was in these places.  This is going to be a game-changer for me! 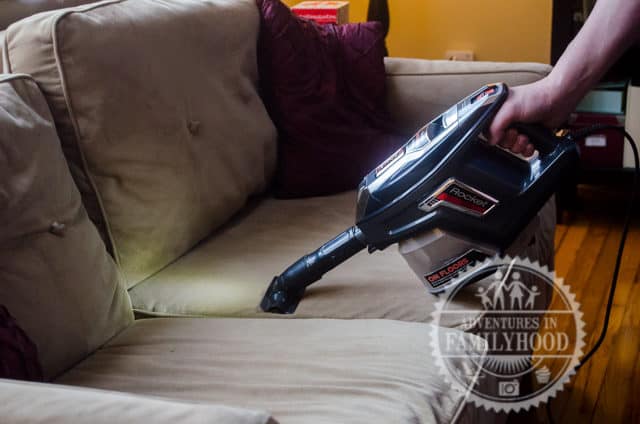 Next, I detached the handheld vacuum and went to work on the cushions.  With my old vacuum, I would do this using the attachments on the end of the hose.  It is such a hassle that I often found it easier to put the cushions on the floor and then lift the old upright on top of them and clean them that way.

The handheld worked very well.  I didn’t have to worry about hose and knocking over the upright portion if I pulled it too far.  I could switch attachments easily and literally walk around the entire room cleaning various surfaces.  The only annoying part is stopping to switch the attachments.  Swapping them out is easy enough, but I never had the next attachment within reach.  The storage clip allows you to keep 2 of the attachments mounted to the wand, but I wasn’t using the wand. 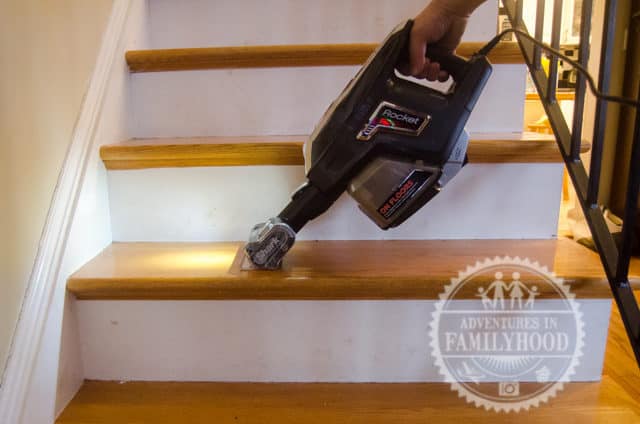 The True Pet motorized brush is a cool attachment.  It gives you the added power of a rolling brush.  We don’t have any pets, but I still found it useful for picking up all the people hairs on the furniture.  It’s also good for getting up things that are stuck to the surface.

When Lisa used the Shark Rocket for the first time, I showed her how to use the handheld for the stairs.  I came back to find her using the handheld on the floor, too!  I tried to tell her she could go back to using the floor nozzle, but she found it so easy to just move around the room with the handheld! 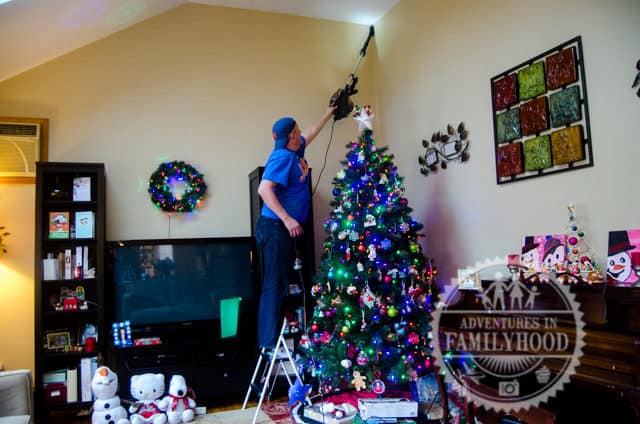 I’m a relatively tall guy.  I can touch the ceiling in every room of our house, except one.  Our living room has a vaulted ceiling that is about 12 feet tall at its highest.  That’s not a problem for the Shark Rocket, even with a Christmas tree in the way! 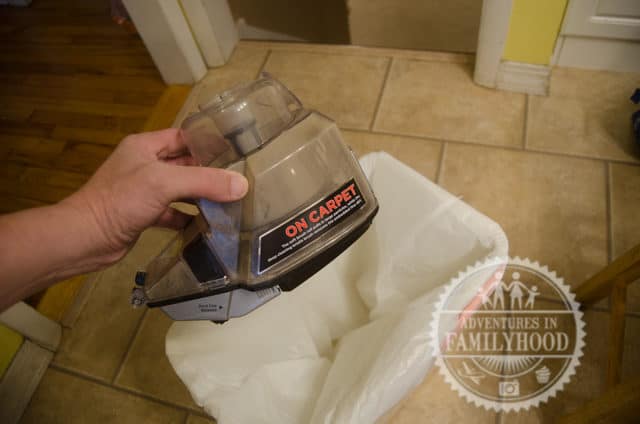 The Dust Cup is a lot smaller than the vacuums I’ve had in the past.  So it needs to be emptied more often, especially given the amount of dirt we seem to have around here.  The Shark Rocket Complete is getting a workout in our house, I can tell you. 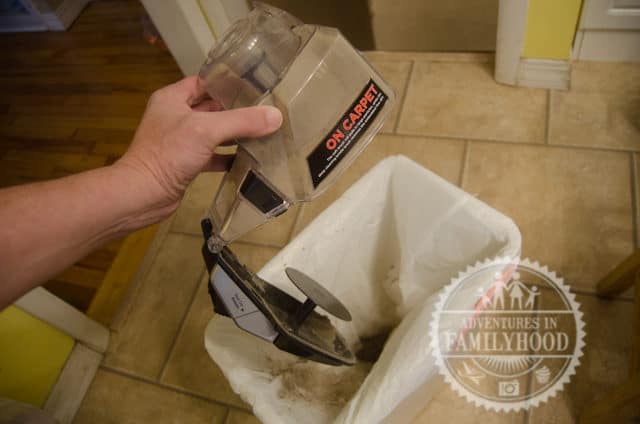 The size of the Dust Cup doesn’t bother me as much as the design.  Whatever dust, dirt, and objects you’ve sucked up into it will all fall out upon opening.  So, if you happen to suck up any LEGO pieces or earring backs like I did… you are going to have to make sure you turn it upside-down before you open it up.  This way you can dig around and save those things… if you want to. 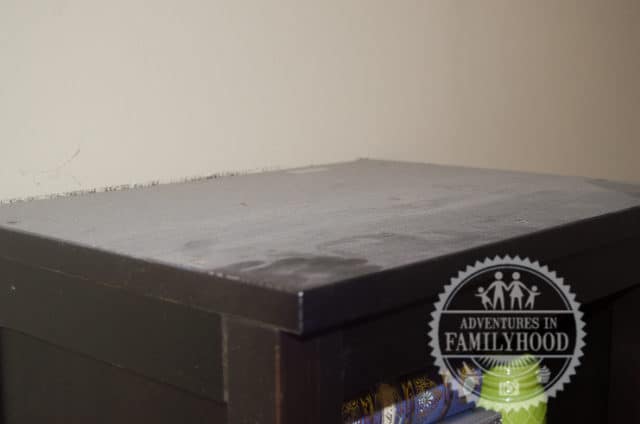 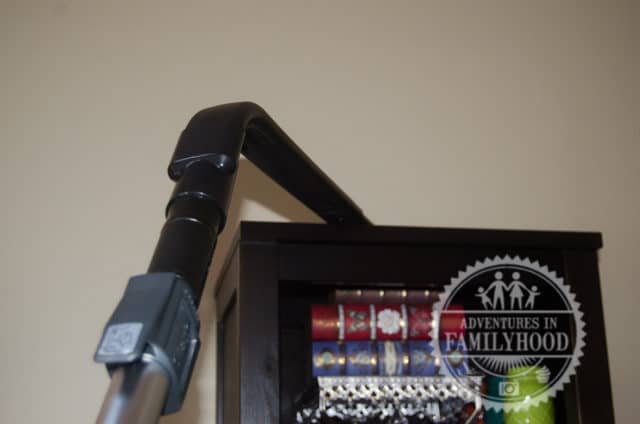 I thought I could do it by turning the under-appliance tool upside-down. It was a little awkward, but I gave it a try. 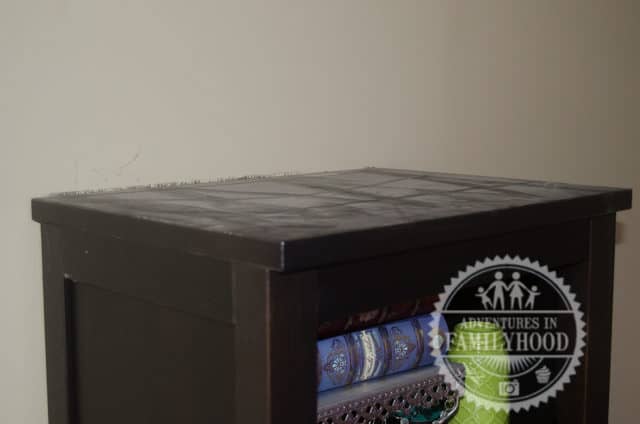 But that didn’t do a good job. 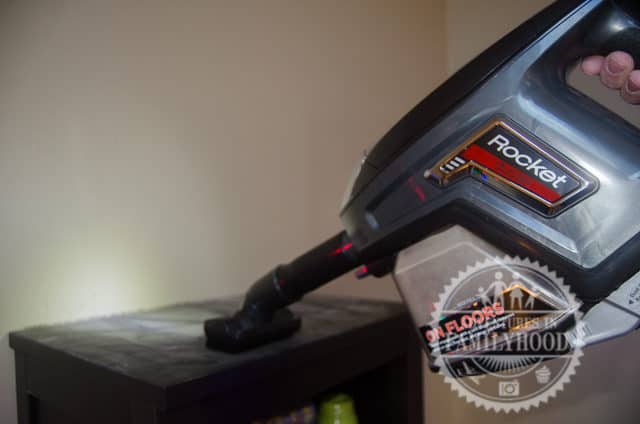 In the end, I climbed up on my stool to get the angle for the duster attachment.  As long as you can get above the surface you want to clean, this will work.

I wish Shark made an attachment for this purpose, and it turns out they do!

You just have to buy it separately.  It sells for $23.95 on the Shark Website. I guess I can’t complain since I was given the Shark Rocket Complete for this review.  But if I were buying this for myself, I would rather have this attachment over some of the others. 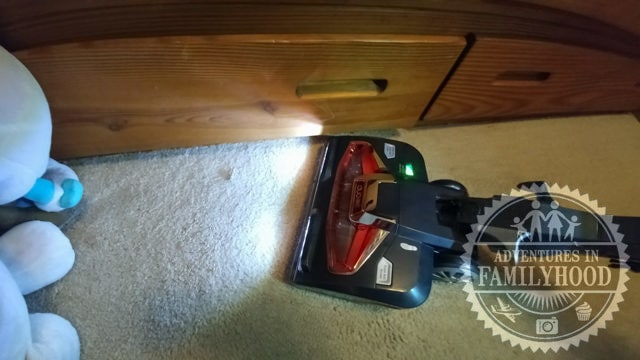 The addition of the LED lights seemed like a gimmick or something just for looks when I saw it on the box.  While actually using the Shark Rocket, there were several times that the lights helped me see a spot I missed, or helped me avoid sucking up one of Jackson’s LEGO pieces.

One of the other surprises of the Shark Rocket was the easy access panel for the roller brush.  They even included a hair cutting tool. 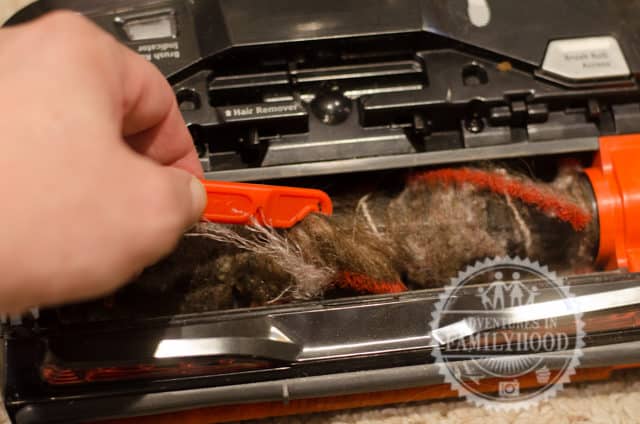 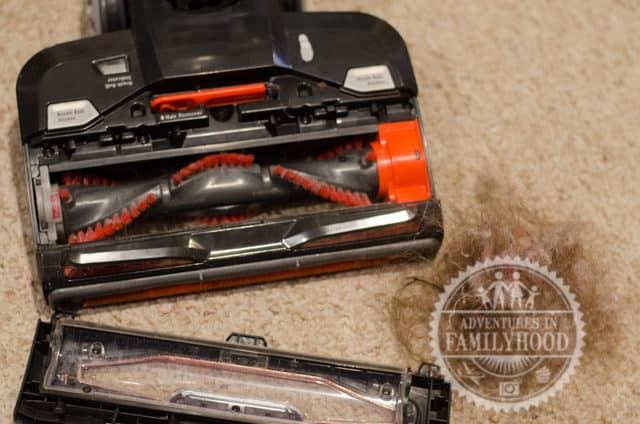 As you can see, even without pets, our family has a hair problem.  (I’m going to blame this on Lisa’s Italian heritage).  Hair getting wrapped around the roller brush is a major PITA, and while the hair removal tool might have been better if it actually had a sharp edge for cutting through the hair, it still did the job. 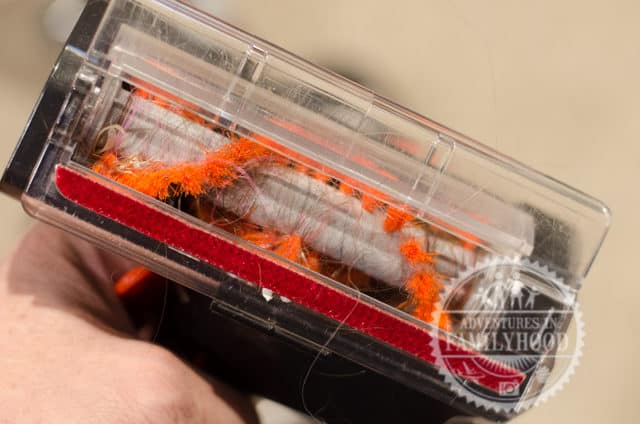 Unfortunately, the True Pet motorized brush attachment requires you to do it the old-fashioned way. 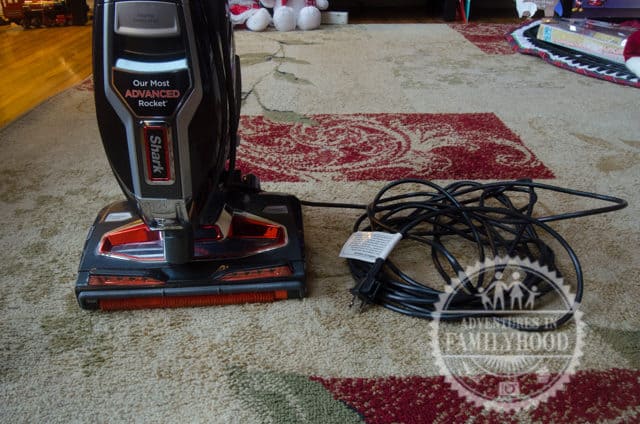 The generous length of the power cord allowed me to go all around our biggest room without having to unplug the Shark Rocket and find a more convenient socket. 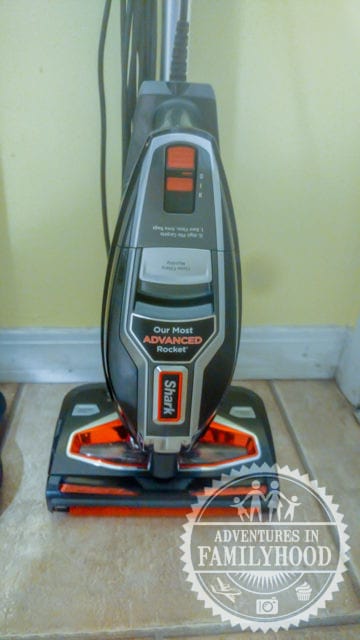 There are two ways to store it when you’re not using it.  The handheld vacuum can be detached and can sit on top of the floor nozzle.

Or… you can use the included wall mount to hang it on the wall.  As of right now, I haven’t found a place to put the wall mount.  But I have a feeling that I’ll be using the Shark Rocket so much that it won’t get hung up that much.

You can purchase the Shark Rocket Complete right from the Shark Online Store, where it now seems that the model with the True Pet upgrade comes with the much-needed Multi-Angle Dusting Brush! 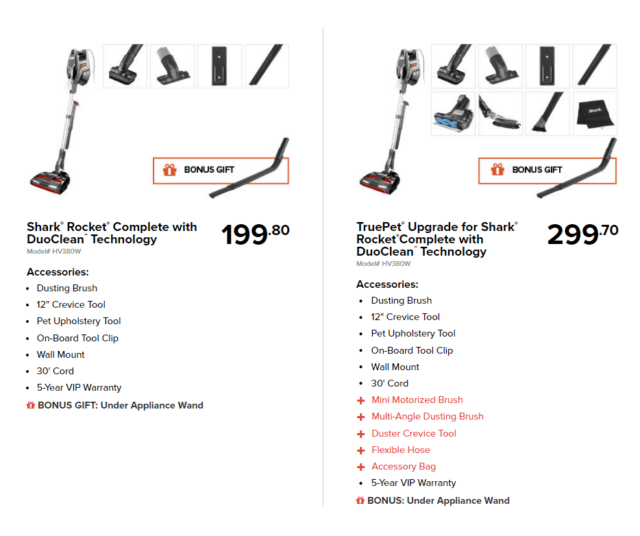 Comparing those prices to some of our other favorite stores:

It’s a way better deal to buy the basic model HV381 directly from the manufacturer.  If you want all the bells and whistles and the True Pet motorized brush, you might stumble upon a bargain if you shop around.

I could only find a few flaws and/or annoyances with the Shark Rocket Complete Ultra-Light Vacuum.  I wouldn’t let such minor issues  stand in my way of owning this machine.  I’ll be going on a local buy and sell group right away to see if anyone wants to buy my old Shark Navigator because there is no room in this house for it anymore.  The Shark Rocket Complete is my go-to tool for making 2017 the year we keep our house clean!  The 5 year warranty is nice, too!

The Shark Rocket Complete could make a good gift, if you think a vacuum would be a good gift (I’m on the fence about that one).  This would be something I might put on a wedding or housewarming registry.  I would definitely consider it a good use of any gift cards you got for the holidays.  Think of it as an investment in your sanity for 2017!

We were provided with a Shark Rocket Complete Series Ultra Light Upright Vacuum for the purpose of this review.  My opinion of this product is my own.  This post contains affiliate links.

109shares
We use cookies to ensure that we give you the best experience on our website. If you continue to use this site we will assume that you are happy with it.OkPrivacy policy