We were invited to a special preview of “LEGO Ninjago Movie Days” at the LEGOLAND Discovery Center Westchester outside of New York City. We got a sneak peak at some of the special activities planned to celebrate the release of the “LEGO Ninjago Movie”. 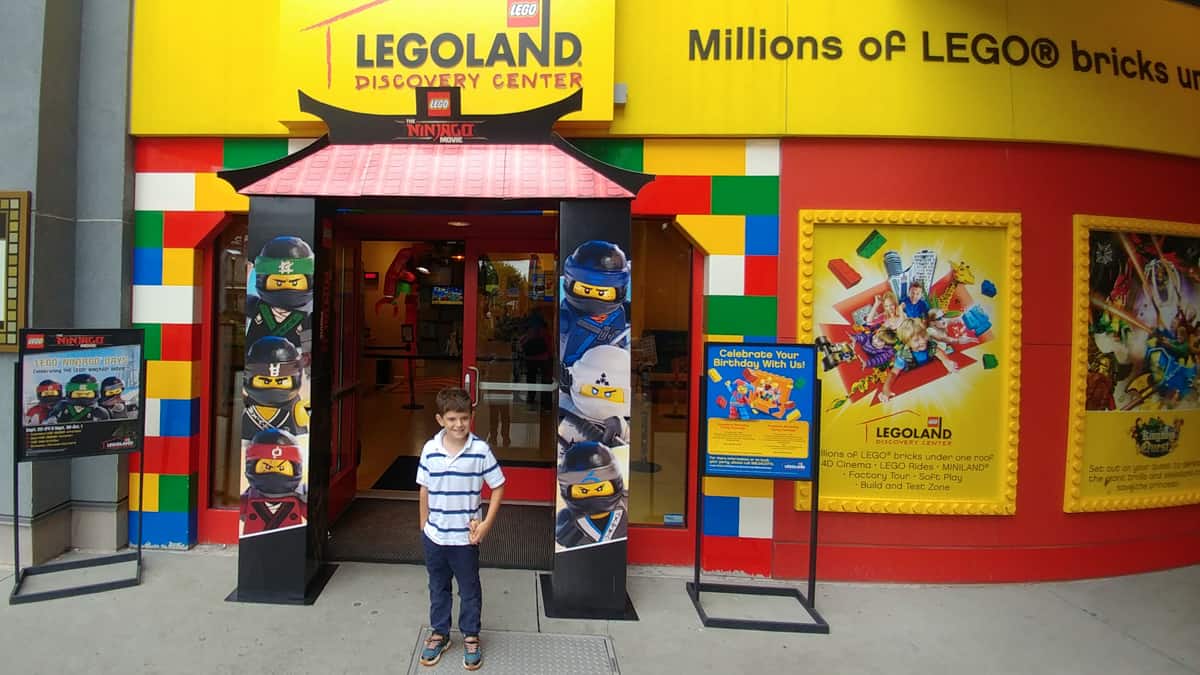 We’ve visited the LEGOLAND Discovery Center Westchester a few times with the kids, but this was our first special event invitation. We were invited because we had written about our last experience and shared it with all of you. From what I could tell at the event though, these special preview days are also a perk of having an annual pass. If you live close enough that it’s possible to visit a LEGOLAND Discovery Center a few times per year, then an annual pass would make sense. Then, you can take advantage of some of these special events, as well.

The LEGO Ninjago Movie Days are being held at all LDC locations to celebrate the new LEGO Ninjago Movie. Here’s a breakdown of what the special event entails at our location in Westchester from the folks running it:

In the spirit of this highly anticipated film, opening in theaters nationwide on September 22, LEGO Ninjago Movie Days is creating epic fun for kids and families with a ninja-themed MINILAND scavenger hunt; LEGO build activities including a big mosaic build of Lloyd, the Green Ninja of Energy; and more. Guests can decode the secret language of NINJAGO with LEGOLAND Discovery Center Westchester’s Master Model Builder Anthony Maddaloni; win prizes including a family four pack of annual passes; and attend a meet and greet with Kai, the Red Ninja of Fire.

Families are also encouraged to explore their inner ninja with a visit to LEGO® Ninjago City Adventure – the attraction’s two-story, 2,300-square-foot interactive play area. Modeled after the Temple of Airjitzu, LEGO® Ninjago City Adventure puts guests’ physical skills to the test as they fight to save Ninjago City. Together, adults and children will test their balance, agility, strength and endurance to become a Spinjitzu Master, all while experiencing more than 20 interactive features.

And these things are all on top of the normal fun of being at a LEGOLAND Discovery Center. The preview party we were invited gave us a taste of that. 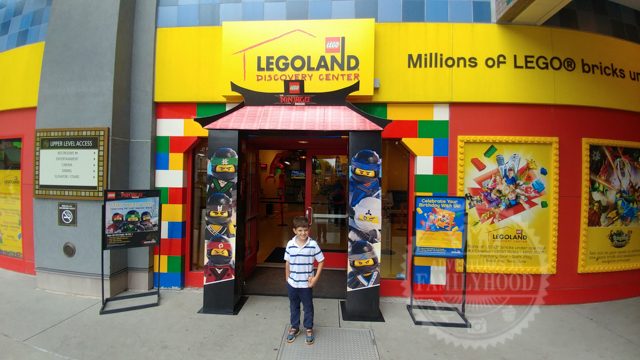 We arrived and checked in for the preview party. We received our passes and were let in to the LDC just like any other guest would be. In fact, on this occasion, we waited an unusually long time in the entrance to the factory as no one was there to open the door and let us in. Oops!

But once through, we took a ride on the Kingdom Quest attraction and walked through the New York City MINILAND on our way to the main area.  For the Ninjago Movie Days, the MINILAND will get a Ninjago scavenger hunt. We didn’t get to do this, so I assume Ninjago minifigures or models will be hidden within the display for guests to find. 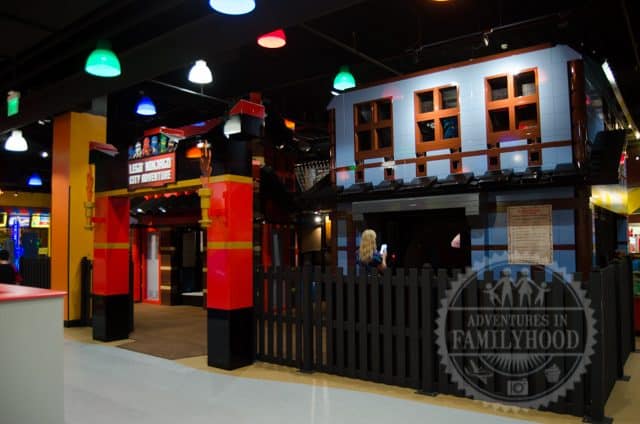 We had arrived a few minutes early, so Jackson spent some time playing in the LEGO Ninjago City Adventure before we headed to the birthday party room for the special event. It’s a great place for kids to hone their ninja skills. Even if you can’t make it to the LEGO Ninago Movie Days, this playground is always here for your little ninjas to have fun in! 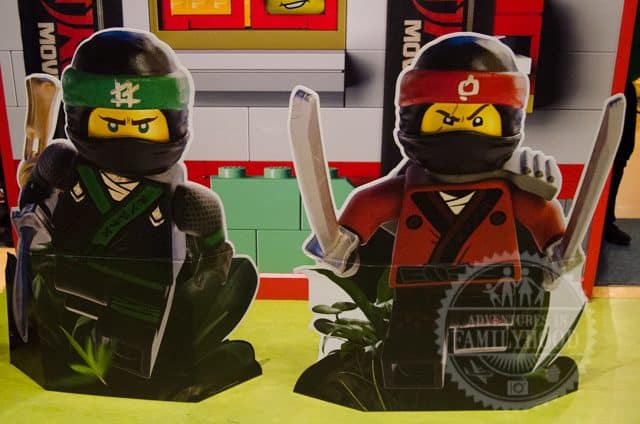 Inside the party room, we received our movie tickets (a perk of the preview party and not something you get as part of the Ninjago Movie Days weekends) and some ninja headbands. Jackson didn’t want to wear his and I don’t think it was big enough for my head. They also had some Ninjago character pop badges. I’m honestly not sure what you are supposed to do with those. 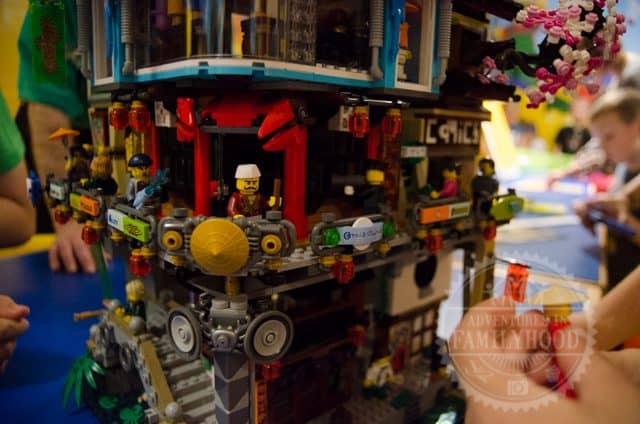 Next, we saw a LEGO Ninjago City model that was already built and on display.  It featured many Ninjago characters, including Lloyd, the Green Ninja. I loved the detail in this set. But you should see the prices for it on amazon… ridiculous! 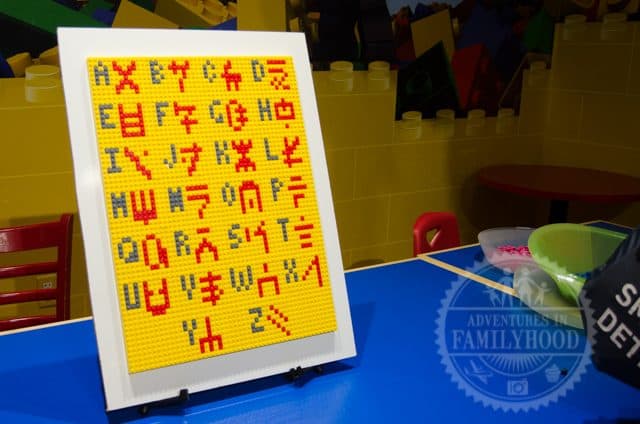 On an easel was an alphabet chart showing ABCs and what I assume was Ninjago-ese. This was made out of LEGO bricks but it was just for looking at. Jackson pointed out all the letters in his name and moved on. 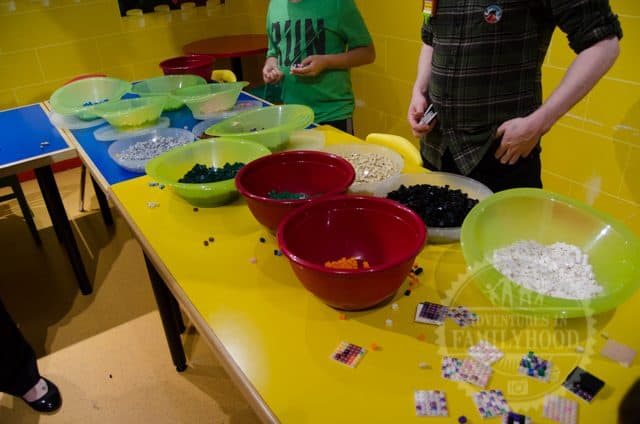 At the end of the table was the giant mosaic build. Here you could grab and color-coded LEGO plate and fill it with the appropriate single bricks. 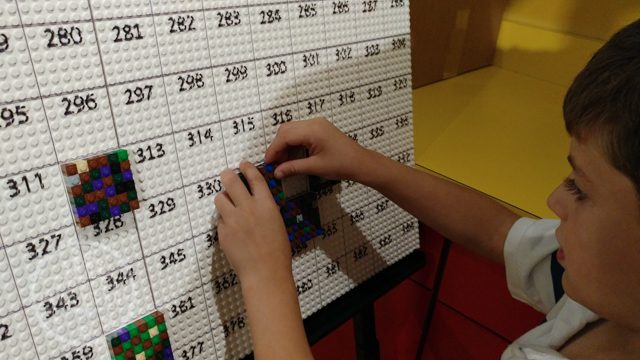 Once completed, you added your plate to the LEGO grid. When all the plates are added, it makes a picture. Jackson and I both guessed it would be a picture of Lloyd. We never got to see it finished. There just weren’t enough people and not enough time to complete it. 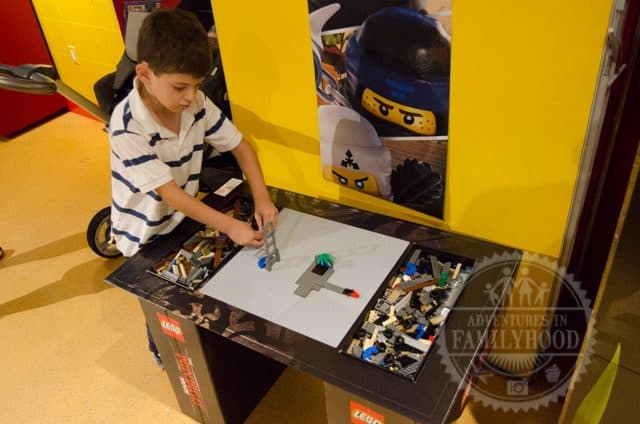 There was also a LEGO table with Ninjago pieces for building your own creations.  This was Jackson’s favorite party activity. He loves to make his own LEGO creations. 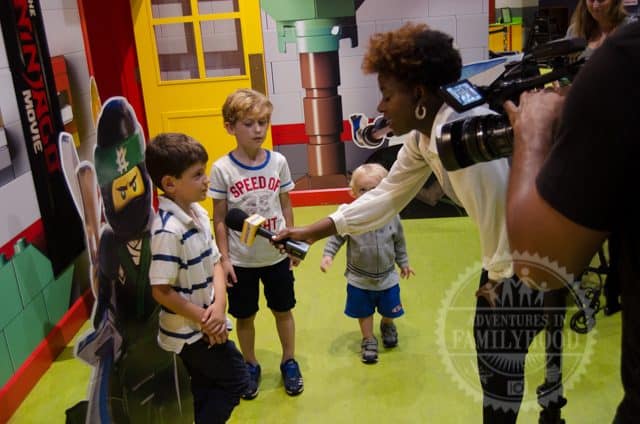 A local news reporter was on hand to do a story on the preview party.  She interviewed some of the guests. Jackson made the final report!

In the video, you can see there was a meet and greet with Kai, the red ninja, at the party. There were also characters upstairs at the movie theater. Jackson didn’t want to get his picture with them, though.

The hour-long party went by quick and it was soon time for the main event. We went upstairs to the movie theater, bought some snacks, and enjoyed the LEGO Ninjago Movie!

You can read our full review of the movie here, but the short version is that we both enjoyed it, but it definitely wasn’t better than the LEGO Movie.

But that being said, when the movie ended, we went right back down to the LEGOLAND Discovery Center to hit the LEGO Store and get Jackson a Ninjago set to play with! (We may have also bought some minifigures and a small set for both myself and Bella as well.)

Thank you LEGOLAND Discovery Westchester for inviting us to this preview party!

When Are My LEGO Ninjago Movie Days?

Here are the dates for LEGO Ninjago Movie Days at a LEGOLAND Discovery Center near you. Activities being offered may vary by location, so be sure to visit the specific location’s site to check out the events. Just click the city name to be taken to that location’s site.

We received free admission to the LEGO Discovery Center Westchester for the preview party, as well as complimentary tickets to a special screening of the LEGO Ninjago Movie. Our opinions are our own.