If you have any LEGO fans in your family, then a visit to a LEGOLAND Discovery Center should be on your LEGO Bucket List. 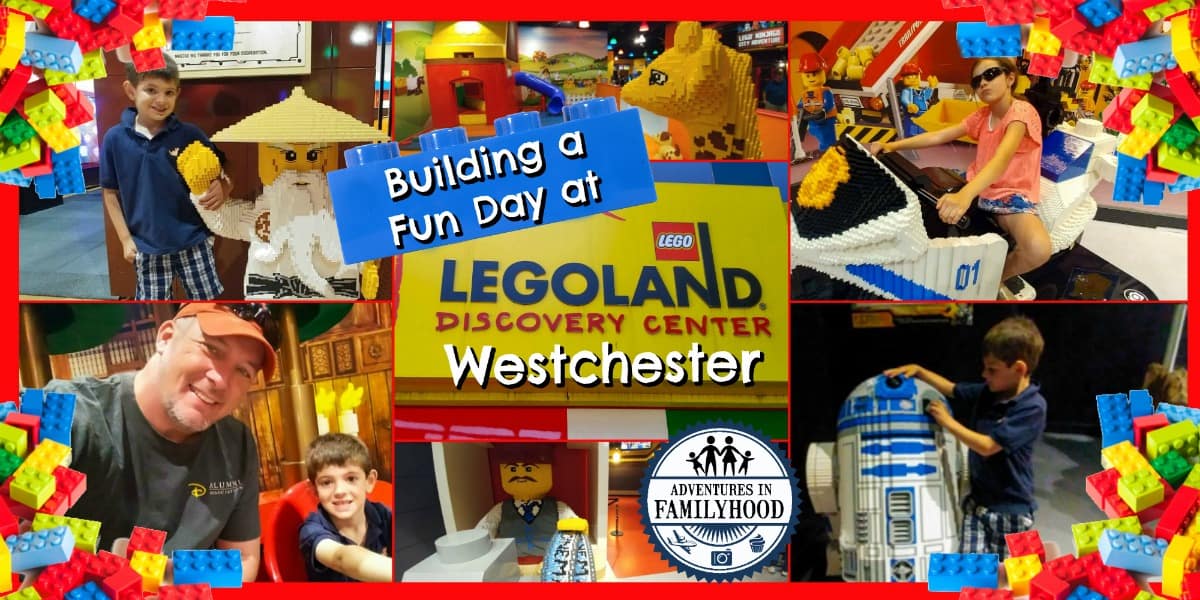 With Lisa away on a trip of her own, I spent some much needed time with Bella and Jackson last weekend.  The highlight was our day trip to LEGOLAND Discovery Center Westchester in Yonkers, NY.  It was a great way to kick-off summer vacation with some LEGO fun! 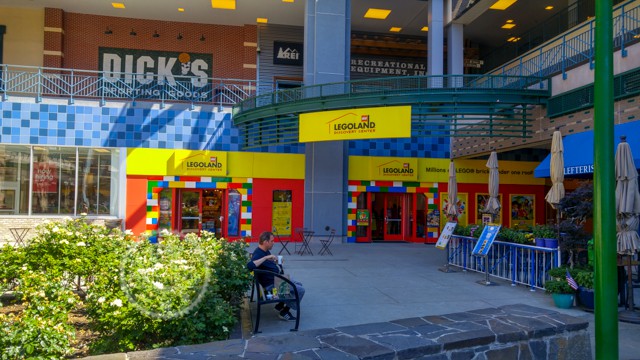 This was our third visit to LEGOLAND Discovery Center Westchester. It’s about an hour and a half drive from our home, so it makes for a good day trip.  It’s located in the Ridge Hill shopping center, which makes it easier to make a day of it when you add in a meal at one of their restaurants and some shopping.

In fact, your admission to LEGOLAND Discovery Center is good all day, which means you can take a break if you need to and return later.  That also means you aren’t forced to eat only from the LDC cafe. But good luck getting your kids to leave, even with the promise of returning that same day!

In addition, there is an annual pass option for $65.00 per person, which is totally worth it if you plan to visit at least 4 times a year.  There’s even a slight discount for buying a family pack of at least 4 of those, plus a renewal discount.

We chose the extra value package this time. I was interested to see what collectibles we were given.  Jackson and I both received minifigures.  Bella chose a LEGO Friends animal tic tac toe game. 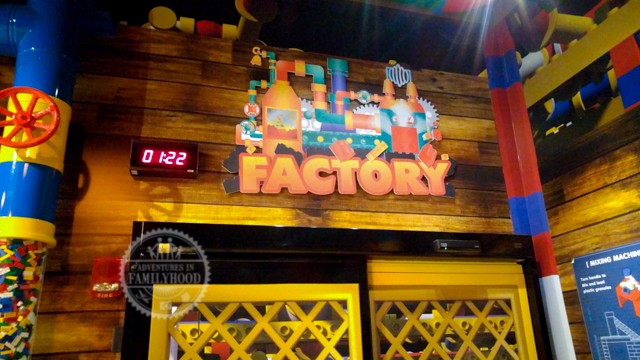 Our first experience inside the LEGO Discovery Center is learning a little bit about how LEGO bricks are made.  I remember our very first visit we were greeted by a factory worker who led us through the exhibit station by station, explaining the process and answering questions.  We even got our own souvenir LEGO Factory brick. 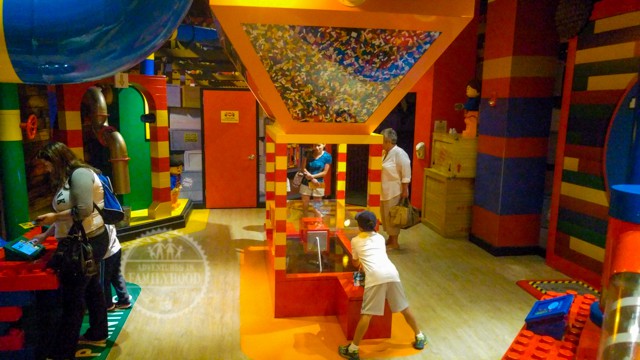 On our second visit, we were simply let into the room and explored on our own.  This latest visit was the same, with the exception that a few of the stations were out of order.  There was a bucket of bricks left out for us to take one using the honor system.

It’s hard to say if this is what everyone’s experience is lately.  Maybe we’ve had bad luck the last two visits. I was disheartened because this is the first impression and I worried it was a sign of things to come as we explored more of the attractions. 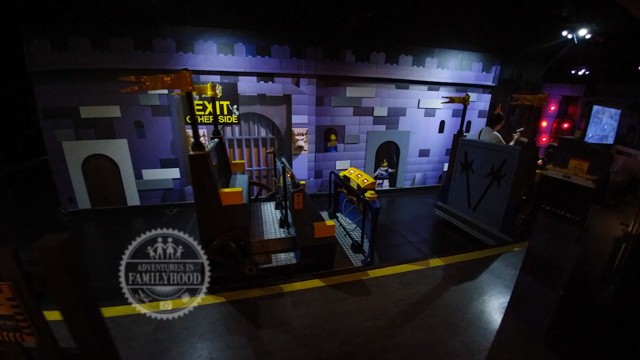 One of two rides at LDC, Kingdom Quest is an interactive ride that takes you through several scenes of a story to save a baby dragon.  Players can score points by shooting targets in each scene.  Some of the targets are objects, but others are part of an animated scene.  It’s a short ride, but one that you can enjoy again and again.

It was also good to see that it was in working order.  It did have a hiccup the second time we went to ride, but the wait was minimal while they got it back up and running. 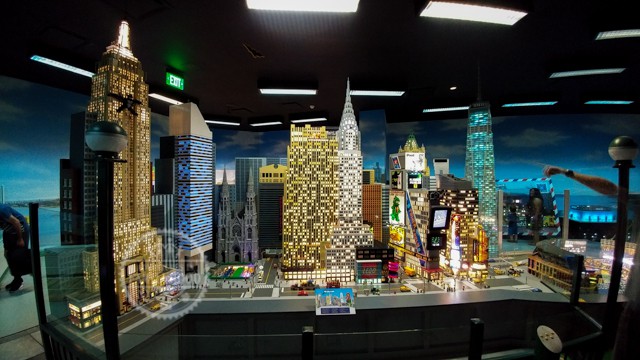 One of my favorite things to see in any LEGO destination are the custom models.  LDC Westchester’s Miniland is an incredible display of some of the most iconic New York City attractions. It’s fun how the lights are timed to dim and brighten so you can enjoy it both as a daytime and nighttime scene.

One touch that was missing were the fireworks over the Statue of Liberty.  The sound effect was there, but the projector wasn’t working that day.  I think the ferry used to move around the water too.

Still, I could spend the whole day in here finding all the cool details. Did you see King Kong? 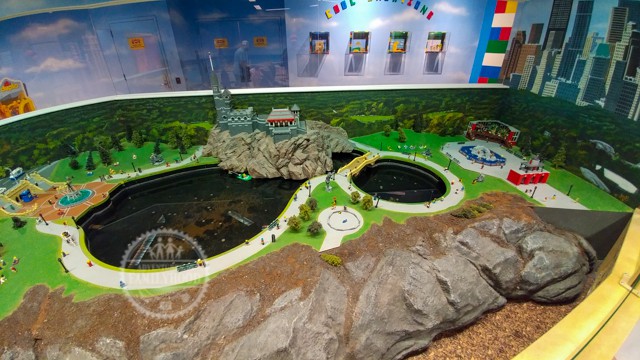 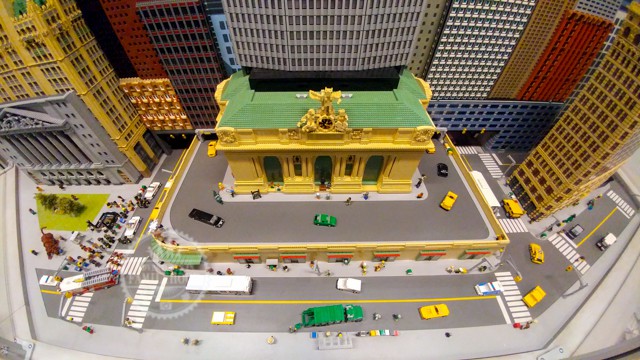 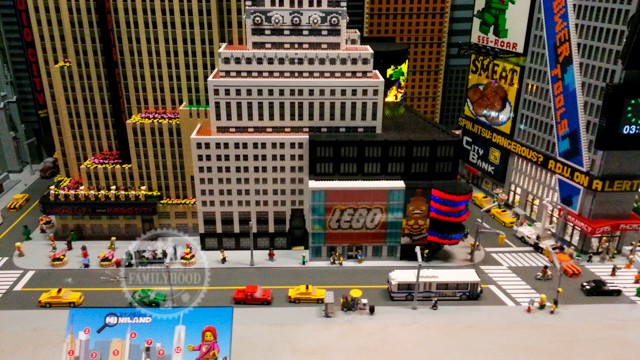 Up to this point, the experience has been moving from one attraction to the next. But when you exit Miniland into the main portion of LEGOLAND Discovery Center, your kids will be able to dash off to whatever experience catches their eye.  There is someone at the exit who may prevent your children from leaving without you, but parents need to supervise their children in this area, especially the younger ones. 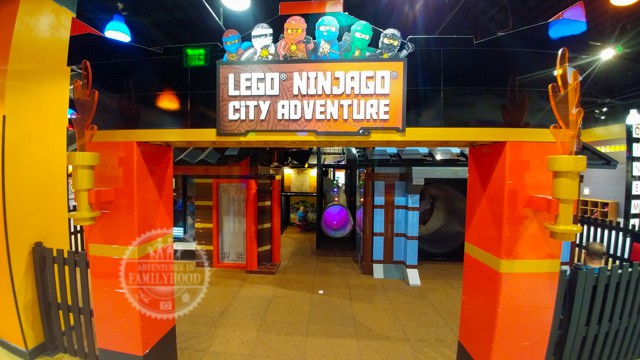 Remember that bad first impression from the factory tour?  I was happy to see that the playground in the center of the LDC had been updated.  What used to be a firefighter themed playground was now a Ninjago themed play area.  It is really cool. Bella and Jackson loved the light up slide and all the interactive elements of the play area. 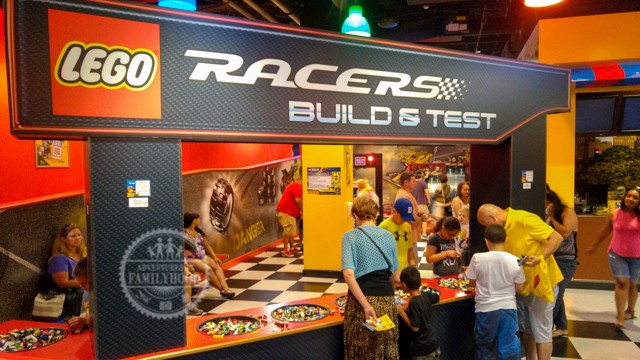 If you had asked me where I thought my kids would be before we got there, I would have put my money on the LEGO Racers area.  They love building cars and racing them at the LEGO store in Disney Springs, at Brick Fest, and at Jackson’s LEGO birthday party.  I was amazed that they didn’t set foot in this section until after lunch.

As you might imagine, this is a popular attraction and it can get chaotic.  But it’s a lot of fun to build and race cars on the tracks. We had to build our own version for Jackson’s birthday party and the kids loved it!

This is the other ride at LEGOLAND Discovery Center. Bella rode Merlin’s Apprentice Ride at least 8 times when we were there.  Jackson rode it twice.  It’s not as fun for him because his legs aren’t long enough to pedal yet. 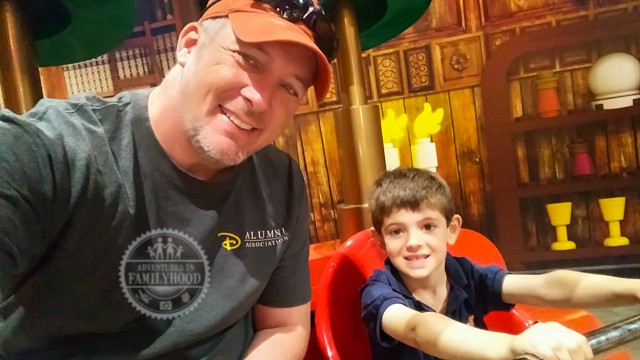 You have to be at least 3′ tall to ride.  Kids under 4′ must ride with an adult.  Bella is about 5′ tall and could ride alone, but the operator still had to get the okay from me to let her go on alone. 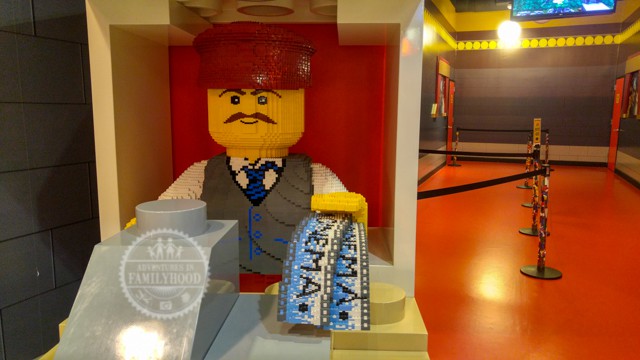 In the LDC theater, you can enjoy a cute LEGO 4D movie.  4D means 3D + some special effects like rain, wind, or snow.  Shows are about 15 minutes long. 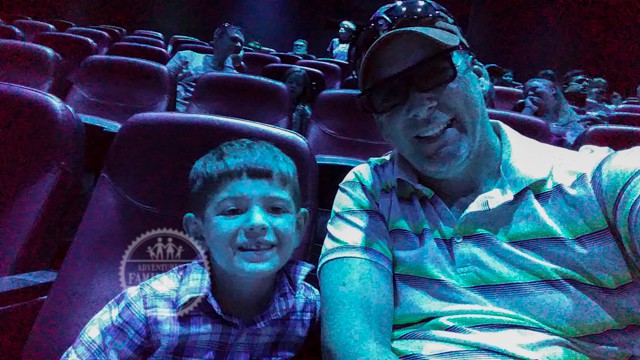 We saw the new “sequel” to the LEGO Movie.  It was very cute, although the special effects might have been a little too much. 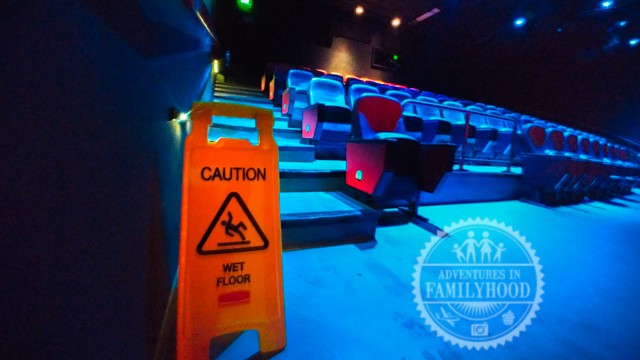 You get very wet, and so does the floor. I don’t recall it being that wet when we saw the Chima movie on a previous visit. 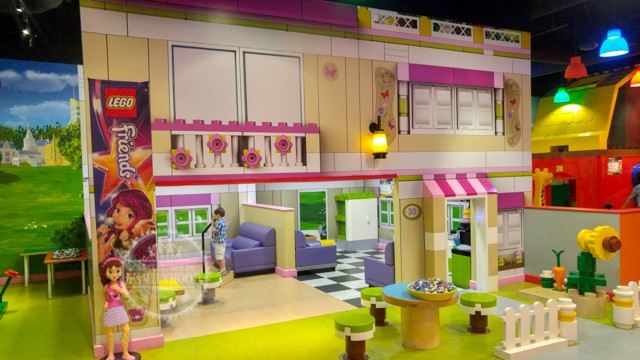 One of the LEGO building areas is themed after LEGO Friends.  Kids can play house, sit and build LEGO creations from the bins of bricks, or even sing a long with some karaoke tunes. 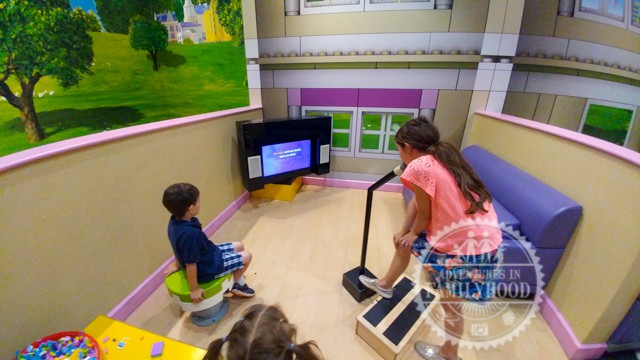 Bella was shy at first, but it was hard to pull her away from the microphone once she got going. 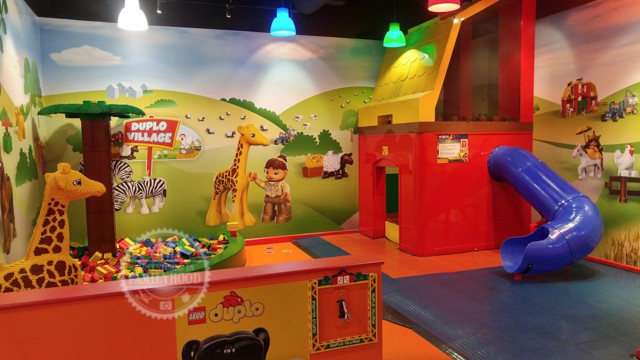 Next to that there is an area just for the younger kids. Jackson is still little enough to enjoy the adorable Duplo play area.  Bella found that it was a little small for her. 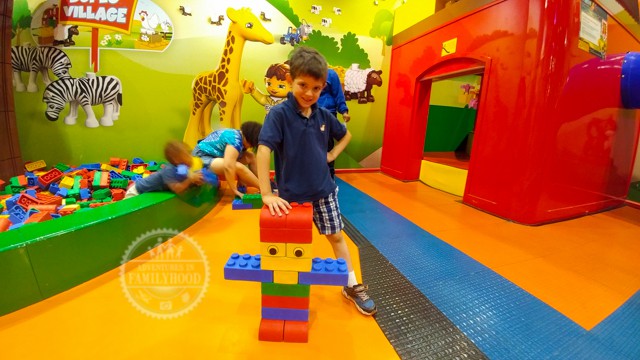 The large soft bricks are not really Duplo, but they are fun. 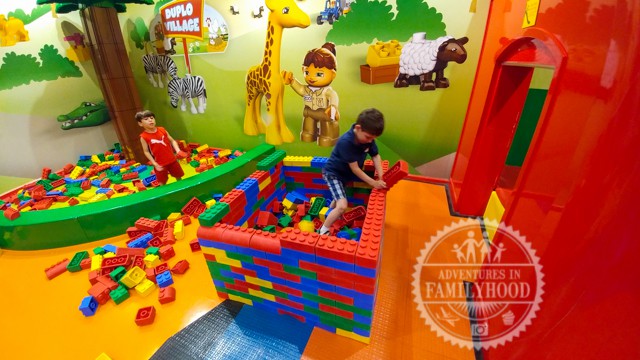 At one point, several children were working together to build a large house out of the bricks. I think they learned an important lesson: leave a door so you get get out! 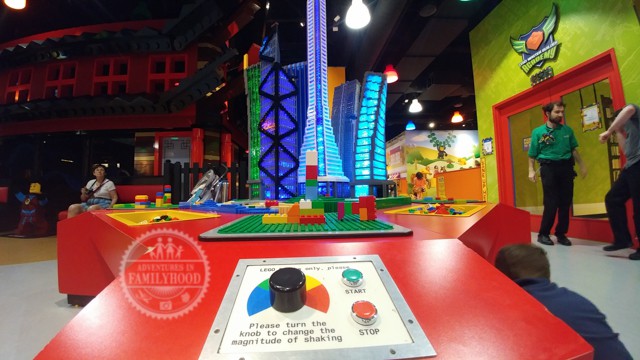 The Earthquake table is where you can find actual Duplo bricks, and try to stack them high and see if they can stand when you turn the dial to create an “earthquake”. 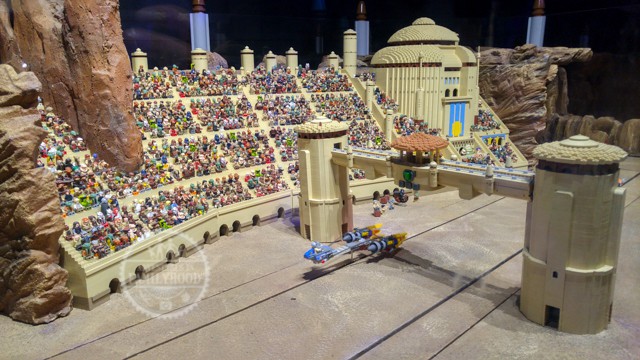 Another model display is the Star Wars Episode I Miniland.  Even if you or your kids aren’t into the Star Wars prequels, it’s still quite a sight to see.  There are hundreds of minifigures in the podracing display! 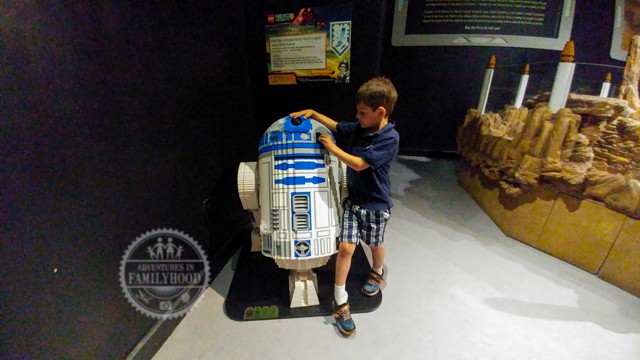 Both our kids love LEGO Star Wars, so they enjoyed checking out the models, especially the life-size R2-D2. 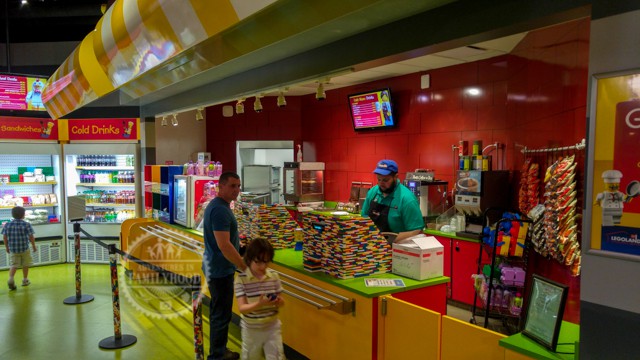 If you get hungry, there are some offerings in the LEGO Cafe.  As I mentioned before, you are free to go out into the mall for food and then come back. (you can’t bring outside food in). 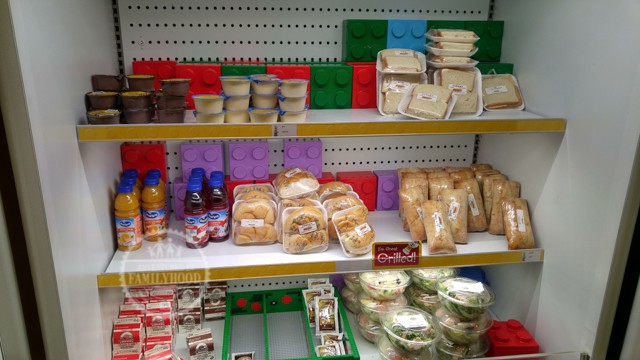 Most of the food is grab and go, though there are some items that they will heat up for you.  Lunch on our last visit was $26 for the 3 of us.  That was a sandwich, drink, and snack.  So you may want to consider bringing a lunch in a cooler, and enjoying that outside if you want to save a few bucks. 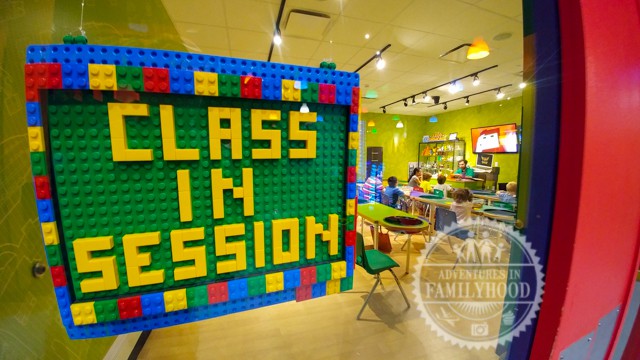 This is something we didn’t take advantage of.

Throughout the day, you can take part in workshops or sometimes even special events where you learn tips and tricks for building with LEGOs from a master builder.  The website says that the regular classes are weekend only, but we were there on a Monday and the classes were in session… perhaps it is daily over the summer?

It appears to be included in the price of admission, but you don’t get to keep what you build. The sign did mention that you could purchase the models that you build in the Academy at the LEGO Store. 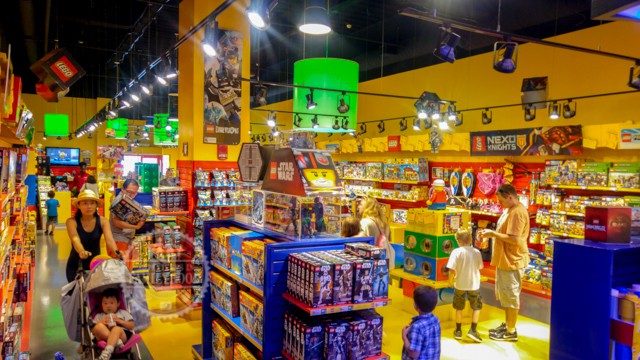 Of course, on your way out of the LEGOLAND Discovery Center you will be enticed to bring home a souvenir from the LEGO Store.  As you might expect, they have a pretty good selection.

You can have a birthday party at the LEGOLAND Discovery Center, or bring your toddlers for special programs just for them.  There are even Adult Nights for grown-ups looking to play. (adults are normally not allowed inside without children).

In the United States, there are LEGOLAND Discovery Centers in Atlanta, Auburn Hills MI, Boston, Chicago, Dallas/Fort Worth, Kansas City, Philadelphia, Tempe AZ, and Westchester NY. There is also one in Toronto.

In our opinion, the LEGOLAND Discovery Centers are a much better experience than Brick Fest, but probably pale in comparison to a visit to a LEGOLAND Theme Park.  Still, it’s a great way to spend a day being creative, playing, and getting inspired with your LEGO fans!  I highly recommend checking one out if you have one near you, or are planning to visit one of the cities with a LDC location.